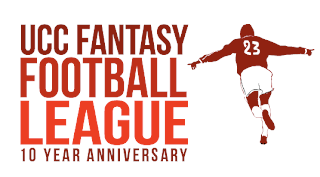 The 2010/2011 season marks 10 great years of fantasy football in UCC. We are always seeking new members so, if you are interested in joining, please contact me at a.quinlivan@ucc.ie.
Posted by Aodh Q at 4:20 AM No comments:

Clip Of The Week (Number 5)

Its Sweden!
Its also a good way to break a hip!

Clip Of The Week (Number 4)

With a name like Rocky Baptiste you only expect good things.

Apologies for the lack of a clip last week. I rejected the opppurtunity to put the unpleasantness of Paris on the Blog. This week we have an example of why direct football isnt always ugly.

(a) Ireland played magnificently in Stade de France on Wednesday. They went at the French with a freedom and a fluency we have not previously seen under Trappatoni. If we had played the same way in the group stages, we would have finished top as the Italians were there for the taking.
(b) Like everyone else, I was sickened by how things transpired in Paris. The illegal goal coupled with the scandalous late decision by FIFA to introduce seedings for the play-offs leaves a very bad taste in the mouth.
(c) Contrary to a lot of media commentary, Henry’s handball did not cost Ireland a place in South Africa; it denied us the chance of a penalty shoot-out.
(d) The referee – who otherwise had a fine game – was let down badly by his lineman. It is maddening to think that within 10 seconds of the goal, millions of viewers across the world had access to a replay. Surely, the fourth official should be looking at a monitor and should be advising the referee accordingly.
(e) There seems to be an obsession with labelling Thierry Henry as a cheat because he ‘got away with it’ not because of his intention to deceive the officials. I counted four handball offences by Robbie Keane in Paris, at least two of which were deliberate opportunities to gain an advantage for his team. The difference is that he was caught but the intention was there. How is this different to Henry? To me the outcome of the action is a secondary consideration.
(f) Rules are rules and I think it is nonsense to suggest that the status of the game should alter things. An illegal deception of the referee is wrong whether we are talking about a friendly, a group game, a cup final or a World Cup play-off. And yes, I think Roy Keane has a valid point. When we won an important penalty against Georgia (we were trailing at the time but won due to a penalty and a goal that went in off a shoulder) for a phantom foul against Robbie Keane, did the Irish players rush to the referee and say ‘that was not a foul’? Did the FAI offer a replay? No, we smiled, took the penalty and went on to win the game.
(g) When do we decide that someone’s career should be tarnished? Again, is it based on ‘getting away with it’? Italy’s Pizzini recently handled the ball into the net against Holland and wheeled away in celebration before being called back by the referee. Wigan’s Paul Scharner scored against Spurs yesterday with a handball infringement which was every bit as blatant as Henry’s. Paul Scholes punched the ball to the net (see above) in the Super Cup final (Sir Alex said it was ‘instinctive’). Was he trying to gain an unfair advantage? Of course he was! Wait until Scholes retires in a year or two and listen to everybody labelling him a ‘model professional.’

Let’s keep things in perspective and ease off on the word ‘cheat.’

Where do you start with the events of Wednesday? Well I suppose you have to start with the performance of the Irish team. This is not green tinted spectacles, but this has to be one of the best performances by an Irish team in years, if ever! There is not one player who didn’t play to the full limits of their ability. It was said by many at half time that they worried if the Irish could keep up the same incredible level seen in the first half. Well they did and I think I speak for everyone in saying they were shocked, amazed and intensely proud. Was this finally the vindication of Trapattoni? Ireland played the French team off the pitch, not one French player apart from their keeper can put there hand up and say they played well. The problem for the French was they were not allowed to play; the Irish were in their faces for 90 minutes and beyond, stifling every attack. Many spoke before the game (some Irish pundits too) about the gulf in class between the Irish and the French squad, John O’Shea being the only Irish player in the squad playing in the Champions League, while this is true how many of the French team actually looked capable of playing in the Champions League based on this performance?

I looked at FIFA’s website on Thursday morning and underneath the results of the Netherlands versus France beach soccer match was a summary of the France versus Ireland grass game. To my amazement in the pathetic summary of the game which was written it seems by someone looking at the match on Teletext, there was not one mention of the Thierry Henry handball. This I think typifies the response of FIFA so far! Where is Sepp Blatter? Where is Michel Platini who although being president of UEFA and not directly involved surely owes the public some pathetic sound bite? Blatter is not a media shy person and in many occasions has far too much to say for himself. It seems they are hoping it will all blow over, not likely I imagine.

Everyone knows there were many mistakes made Wednesday night, and not all by the French and the Swedes. Paul McShane should have dealt with the ball, he should not have let it bounce or let Henry get goal side of him, nor should Richard Dunne, and Shay Given should possibly have dealt with it. Let’s face it though; the biggest mistake was not awarding the free out. First things first, Thierry Henry cheated. Plain and simple, there is no denying it and anyone that says any different is a fool (thanks for finally proving it Mr Beckham). The problem though and Henry is right in saying this, it is not his job to referee the game! That falls to Mr Svensson, his two linesmen and the 4th official; the referee had a poor line of sight for the incident, but the linesman was in a clear position to see it and should have attracted the referee’s attention. If the Irish bench could see it you would imagine that the 4th official seen it. The referee told Irish players that Henry trapped the ball on his chest; if this is the case its then it is more obvious he didn’t see it. Why did the referee think the Irish players were livid? In most cases you will get one or two players looking for a decision but the whole team? No doubt this incident will result in one thing and that is a mass campaign for video technology, this will be helpful but it won’t help Ireland get to South Africa. Personally I don’t see a replay happening, for one what if Ireland lost? We would look a little silly, could Ireland reproduce that level or performance? Unlikely. Never a group to let an opportunity to win hearts and minds the government has jumped on the bandwagon calling for a replay also, on the surface this probably looks like kissing babies but to be honest when you think a figure of €26 million was quoted in a national newspaper today as the amount of money Ireland stand to lose at the hands of Mr Henry. We could certainly do with that. Oh and by the way I was aware of Roy Keane’s comments, I just didn’t think they warranted discussion.
Posted by Aodh Q at 4:40 AM No comments:

Clip Of The Week (Number 2)

This week its the turn of the goal keepers to suffer!
I bet you watch this more than once!
How?.........

Clip Of The Week (Number 1)

In a new series there will be a weekly clip from the World Wide Web of sport and all the hilarity it brings.
The first one is from one of the best players to ever grace the Premiership, Mr Henry, showing he wasn't just clever on the pitch.
Posted by Aodh Q at 2:43 AM 1 comment: